Innovations in Environmental Test Chambers: One Expert’s 35+ Years in the Industry 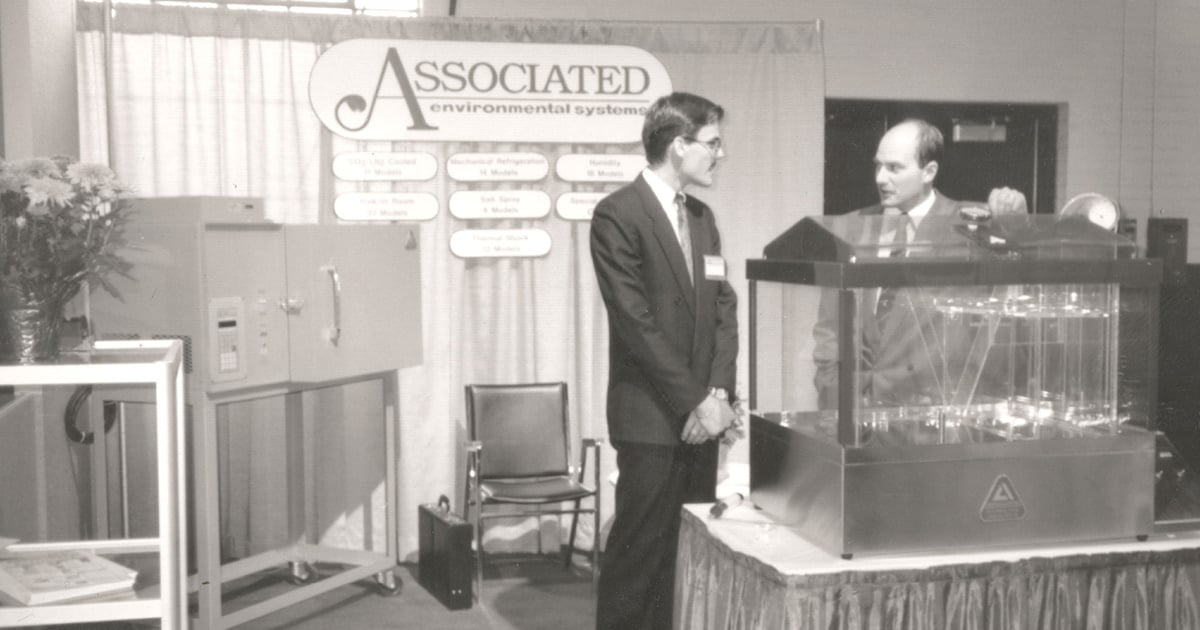 It’s pretty exceptional for somebody these days to work in the same industry for more than a few years, let alone the same company. Then there’s Associated Environmental Systems (AES) Vice President John O’Rourke. He’s been with the test chamber manufacturer for more than three decades.

All the proof you need is in the image above. You’ll see O’Rourke, dressed in a suit, standing next to an MX Series salt spray chamber.

Both he and the series remain important assets to the company to this day.

In this interview, O’Rourke recounts the many changes he’s seen in the industry and the innovations he’s participated in while with AES. He recalls the transition from analog to digital test chambers, the development of remote testing, what’s driven the changes in environmental testing, and what its future may look like.

His responses give a peek behind the scenes at AES where customer service and embracing challenges serve as pillars for the company’s growth.

Portions of this interview have been edited for clarity and length.

Let’s begin where you began. How did you get involved with test chambers?

John O’Rourke: Right after college, I started here. That would’ve been 1985. Then I did an internship with AES for a little while. At the time it was quite interesting, the whole concept.

Most people didn’t know what test chambers were. I thought the industry was really cool, how everything was tested, how the ASTMs and the MIL standards have all these varieties of testing. Materials, fire-proofing, consumer safety, all that is involved, and then the life of a product. When I first started, everything was analog. There were no programmable controllers. Everything was dial controllers. Kind of like you’d see with old stoves. It was just a dial, and you turned the knob.

It was quite ancient. We went to digital controllers, and then we started with large programmers. The newer technology, the newer refrigerants. New people made things bigger, faster, better, and they wanted to do more testing of their products. That’s when thermal shocks came into effect.

It’s been quite a ride. I have a customer I still talk to some 30 years later. We still work at the same companies. I have a couple like that, which is interesting.

When did the transition from analog to digital happen?

O'Rourke: In the 1980s. It started right after I got here. It was little by little. We still didn’t at that point even have a fax machine yet! Everything was done by letter, shows, and meetings. The company went through a lot in its history.

How many different roles have you had with AES through the years?

O'Rourke: At one point when we were very very small, I would sell the chamber. I was customer service, purchasing, and designed a little bit with the engineering team. You just did what it took to help grow the company.

Looking at other changes, with the extreme growth in the number of handheld devices over the last decade, how has that impacted test chambers as an industry?

O'Rourke: It has probably doubled most people’s outputs or requests for chambers, for different safety features, and faster ramp rates than previous years. It’s been affected greatly over the years, as has the technology to run your chamber remotely.

Say you have a four-month test. You’d have to notify somebody in the company or even have an alarm go off. If nobody was there over the weekend and the chamber went down, they’d have to start the test all over again.

Considering that growth, did you appreciate the challenge?

O'Rourke: When a customer wanted certain things, it was a challenge. We wanted their business. They liked our product.

It was a challenge but a good challenge to create something that was not usually within our scope at the time. It has made our company and people grow.

You hire more people to help with those challenges. There’s a challenge with everything you sell because someone wants something totally different from what the last person did.

Has that (customer-driven challenges) changed since the 1980s?

O'Rourke: It’s increased. In the early 1980s, there was this program we did for a semiconductor company. Back then, $2 million was a lot. It was a $2 million project. It was out of the scope of what we were ever doing. We did that project and it was successful. Now, it’s grown.

In listening to you, these changes sound very customer-driven. What else have been sources of innovation?

O'Rourke: A lot of it is market-driven, and it’s due to what the customer is selling. All of a sudden, we were changing all the ways we test batteries on a cellphone. And we want to do more than we’ve ever done in a batch. That chamber has to change to create that requirement for the customer. You come to find out they’re not the only customer who wants something like this. Let’s market it and see how it goes. Then all of a sudden that explodes: “This company actually has a chamber that really does what I want?”

You have competitors out there, and you have to be a step ahead. There’s so many different avenues of testing: battery testing, electronics testing, military testing, and automotive. There are so many different industries and sometimes they are not all going in the same way. This person wants this but that whole industry probably would want something like that chamber. Then you have to tweak it a little bit, market it, or change your standard chamber to be that way.

In the 1980s, every test chamber you ever saw was blue. They were all blue. TI (Texas Instruments) blue. Texas Instruments was the biggest chamber company. Their building was like four city blocks and had like robots delivering mail. Which was the coolest thing I ever saw when I was there. That was unheard of back then.
They drove the color. Why is every test chamber blue? Because they didn’t want to change the wet paint guns. The industry kind of followed. If you look at older chambers, they’re all kind of blue and that’s why.

You’ve been through so many iterations of the company and now you’re the Vice President. Are you still very hands-on? Do you like to be hands-on in the day-to-day operations?

I actually do a mixture of everything. I take a look at every chamber before it leaves the door. Over the years, you know what to look for.

You’ve had customers yell and scream at you: “How come my chamber doesn’t do this?” Or “It’s missing that.” You learn over the years.

Most of the guys don’t have the experience or the eye to see what the customers are going to see, even aesthetic-wise. Customers are picky. They’re spending $13,000. They don’t want to see a scratch. Some people tend to forget stuff. I look at everything before it leaves the building. And, in general, handle all kinds of different questions. A mixture of everything. It’s still quite challenging and fun.

To learn more about Associated Environmental Systems, view our full line of products or contact us today. 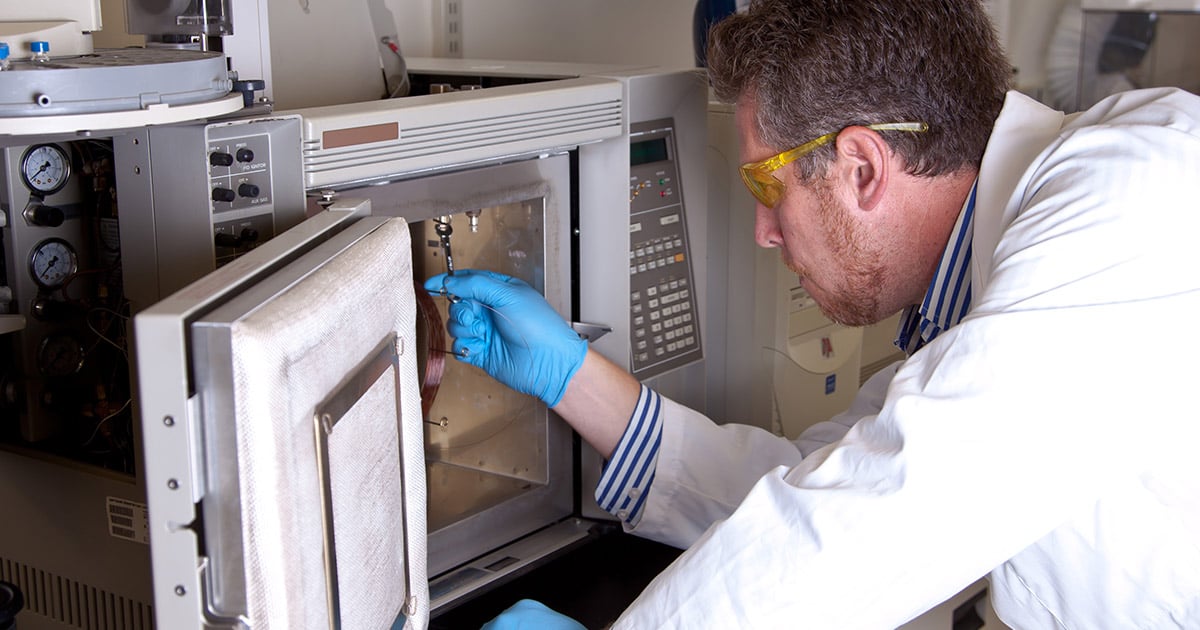 Laboratory Ovens: Use Cases & Qualities to Look for When Buying

What Makes for an Effective Battery Testing Fixture?

What Makes for an Effective Battery Testing...